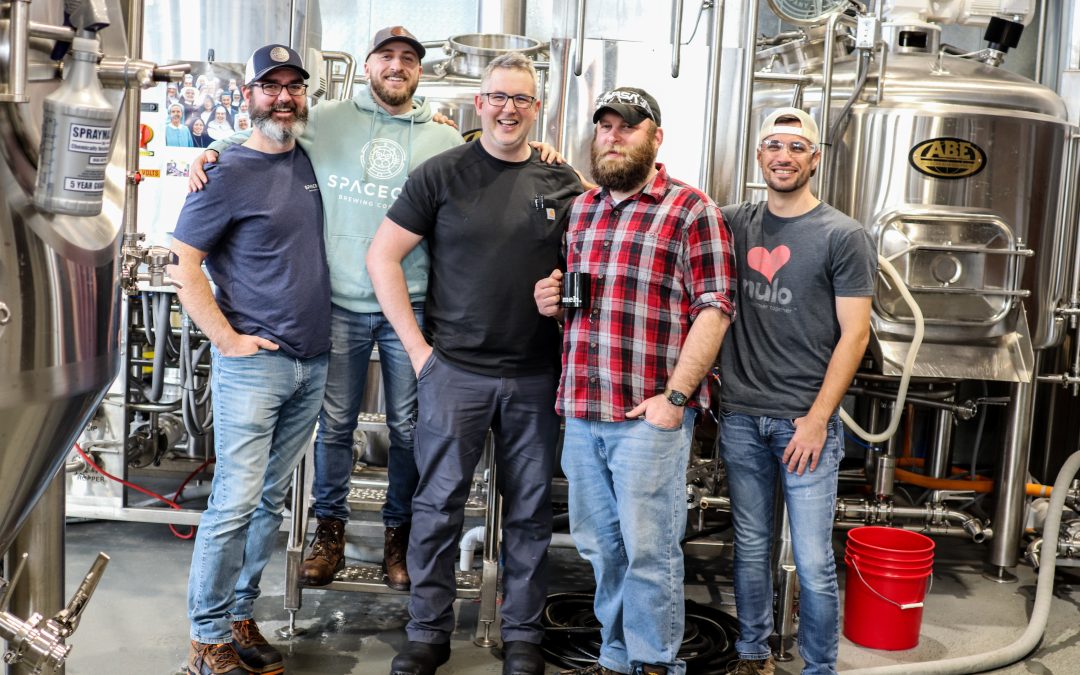 With the opening of Spacecat Brewing Company, South Norwalk finally has a brewery…again.

Not counting the two short-lived microbreweries, Guvnor’s and Iron, which were located in the same space on Washington Street, the city hasn’t had a more prominent, buzzed-about brewery since New England Brewing Co. debuted on Commerce Street 1989 with then head brewer Phil Markowski. New England Brewing Co. added brewer Rob Leonard to the team with the move to Marshall Street. This beloved brewery and restaurant left SoNo in 2001 for Woodbridge, and Norwalk has been without a watering hole like it ever since.

A little less than 20 years later, James Bloom—no relation to the famous local Bloom Family oyster operation—had an idea to open a brewery along with his friend and co-worker Jeff Dunn.

“I worked at Remedy Partners in Darien (that later moved to Norwalk),” Bloom explains. “We tracked Medicare patient healthcare costs during their stays to hopefully reduce costs for patients 90 days post-discharge. I was an analyst and did some programming. I loved it and loved the people I worked with. It was my first real job out of college, but I realized it wasn’t for me.”

It was at that company where Bloom met Jeff Dunn. They were on the same team, and although they weren’t fast friends, they bonded over wanting to do something of their own. Bloom also found out that Dunn has been homebrewing for over 20 years.

“I like beer and kinda like drinking,” Bloom says. “I joked with my buddies in college that we’d open a bar, like a high volume college bar with $4 Fireball shots and $3 Natty’s. That was always in the back of my head. Jeff and I would go to lunch and talk about different ideas like opening a small business or even a pig farm.”

The two went to Dunn’s house in Branford many times to brew beer, and that’s when the ideas began flying. They landed on a brewery concept: a cool space, preferably an old warehouse-type, and good quality beer. 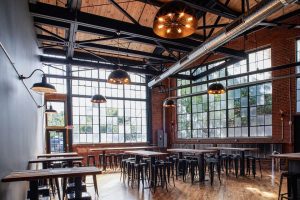 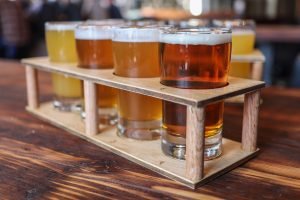 Bloom started to work on a business plan and received funding within a couple of months, enabling him to hunt for a space. It wasn’t until he approached the South Norwalk-based Beinfeld Architecture about designing the still unfound location that he connected with landlord Keith Brown, who owns the historic, early 1900s building once occupied by J. & J. Cash, a textile manufacturer.

“He (Brown) started developing the space after a carting company used it as storage,” Bloom recalls. “When I first came in here, it was used as boat storage. He brought East Coast Kombucha in here with the idea that this could be a beverage place.”

With the location secured and brewing equipment purchased, they only came up against one obstacle—a global pandemic.

Bloom and Dunn decided it would be best to wait nine months to see if other breweries survived. Except for a few, most did make it through the shutdown and various other mandates. They also took the advice of a close friend who said, “Don’t forget, alcohol is recession-proof.”

With a space designed and veteran brewer Roger Krakow on board, they were ready to make beer and think about opening up just as the public became more comfortable heading back into crowds. Spacecat officially packed its taproom with thirsty locals on October 1, 2021, featuring a varied list of styles that included a blonde ale, hazy New England IPAs, a dry-hopped kölsch, a hoppy West Coast IPA, and a biscuity Oktoberfest-inspired Marzen. 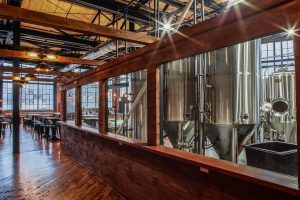 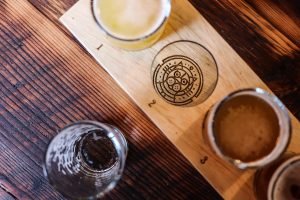 As far as what’s next from Spacecat, don’t expect any heavy lactose, milkshake style, barely recognizable as beer-type beverages. Krakow, who worked as a brewer at Two Roads for eight years, believes in staying on-style or close to a style.

“Roger has so much knowledge,” Bloom says. “He did lots of R&D at Two Roads, even in their sour program. We want to do what’s expected of a style, but add flair. We’re not knocking anyone who’s adding adjuncts like lactose and making it a milkshake. We want to execute it well, then add adjuncts only if it makes sense. We want to nail our dry stout recipe, then add bitter chocolate and cherries. We don’t want to make a 10% ABV beer with a ton of ingredients, then say, ‘It’s gonna knock you on your ass!’ That’s not us.”

Spacecat expects to roll out lighter, crushable options in the spring and summer months like a Vienna lager, more sours, session IPAs, a Belgian witbier, possibly a helles lager, and according to Bloom, an easy-drinking hefeweizen with a unique hop variety that’ll give it a “berry smoothie taste.”

They’ve even started canning after only a few months, and as soon as their beer catches on in more bars and restaurants, they hope to increase production from a projected 350-400 barrels in 2022 to 800-1000 soon.

And speaking of barrels, they’ve been collecting different barrels for creating variants and aged versions of their most popular beers. “We’ve gotten barrels from Two Roads and bourbon barrels from Litchfield Distillery and SoNo1420 (that they used for their barrel-aged Clair de Luna),” Bloom says. “We filled a very old rum barrel that was recently used for gin aging with our Orange Peach Mango Cosmic Candy sour that’ll be ready in 12-16 months. And we just filled a tequila barrel with our Limelight Gose.”

Bloom hopes that with Spacecat having set the stage—and with the pending opening of SoNo Brewing (hopefully soon), more people will view Norwalk as a beer destination, supporting local businesses in the process. He’s also hoping that Spacecat catches on enough so that when their startup phase is over, they can host charity events, make donations, and give back somehow. “We want to tie ourselves to the community,” he says. “More breweries are better for all of us.” 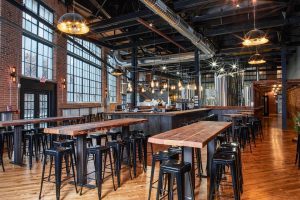 And if you’re still here wondering what the heck a spacecat is, it’s not that complicated. 5-6 years ago, Bloom bought some artwork off Etsy from a German woman doing prints on dictionary paper. “At 25 years old, I felt like I needed some art, and one of those was a cat in a spacesuit that I hung on my wall,” he says. “When I tried to come up with names, I thought about Southern Connecticut Brewing Company and really thought I had something when I said, ‘Charter Oak!’ but that’s been a thing. One night, I looked at the picture and thought…Spacecat. Oh, yeah, that’d be good. The second I thought of it, I thought was it approachable.”